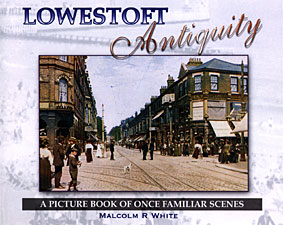 A Picture Book of Once Familiar Scenes

Lowestoft Antiquity features a pictorial journey through Lowestoft and the surrounding area, and includes a wide range of images of well known buildings, locations and major industries no longer part of the local scene. We start on the south side of the harbour reviewing the different aspects of this interesting area, and then proceed through Kirkley and onto Pakefield. From there, we make our way to Oulton Broad to look at the village and visit the west end of Lake Lothing. Our next stop is Gunton, noting the recent changes that have taken place.

It is then onto North Lowestoft, where we stop off at the Sparrows Nest and the High Street area, including a visit to the old part of Lowestoft where many ancient and historic properties stood until the 1960s. We then visit the beach village area, once an attractive and thriving community, now replaced by industrial development. Next our journey takes us through the main shopping area of Lowestoft, the bus and the railway stations and finally the back to the harbour. Colour images of bygone Lowestoft are included, together with wartime notices and classic advertisements.

Lowestoft Antiquity focuses on the period when the area was self sufficient with a buoyant and diverse industrial base, employing in the long term, large numbers of townsfolk. It captures a period of contentment together with a much slower pace of life than today, before the many changes seen in the last fifty years in the town and the adjoining countryside had taken place.

Comprising 68 pages, Lowestoft Antiquity features 106 photographs of which many are in colour, and nine historical illustrations. As with other titles in the series, copies of the book can be obtained direct from the Coastal Publications address, or from any good bookshop by quoting the ISBN reference 09532485 7 7.

Lowestoft Antiquity can be ordered direct from Coastal Publications and is available from any good bookshop.